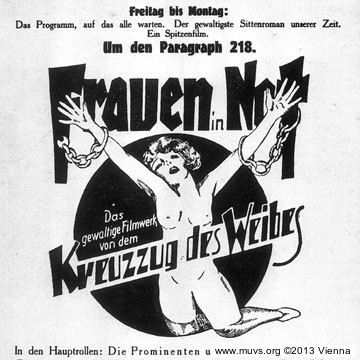 As shown by the earliest surviving records, this theme has polarized the media throughout history:

On the one side are attempts, based on religious belief or ideology, to control the lives of women with unwanted pregnancies and make decisions for them. Efforts are made to either convince them to have an abortion, or they are outlawed or difficult to obtain and solely for a hefty fee.

On the other side, media reports convey the desperation of these women and portray the struggle over their self-determination when their own bodies are involved.

The amount of ‘moral indignation’ is greatest in countries with the highest abortion rates and where women have the least self-determination.

Unwanted pregnancies are prevented most effectively in countries where women are able to choose freely, and they also have the lowest abortion rates.

RU 486 for NY The moral property of women

Speculum of plastic teaching aid from the 'Verhütungsmittelkoffer', an educational kit of contraceptives