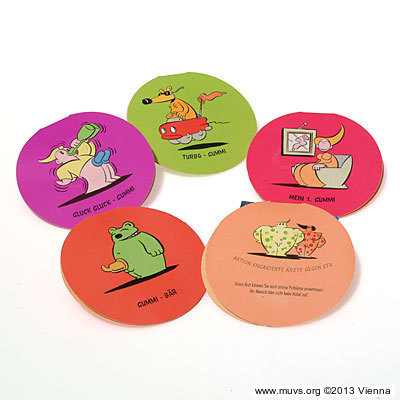 Condoms are natural products: up until 100 years ago, they were made of the swim bladders of fish and sheep appendices. However, these condoms were not elastic, and for this reason a bow was sewn on to keep them from slipping off.

Latex, the milky sap of the rubber tree, eventually became the preferred material for this use. American industrialist Charles Goodyear invented the vulcanisation process, which makes latex milk elastic and stress-resistant by heating it and adding sulphur.

In the beginning, latex condoms were relatively thick and intended for more than one use. For the past 50 years, they have been both strong and ‘ultrasensitive’.

But innovations did appear eventually: a non-latex model was recently launched on the market. Even thinner than conventional types, it is intended for people who are allergic to latex.

Amor A red-blue-white paper bag for a condom.

Amor This small metal container was found during a treasure hunt …

Angel gag codom Condom in the form of a colorful angel.

Big Ben Yellow snap-open cardboard. The back side of the box carries …

Birds'n Bees Three ribbed and studded condoms, each in sealed packaging. From …

Blausiegel condoms. Hygenic and safe. Moist. Condoms in a white-blue plastic packaging on which a couple …

Cocktail - Gummi (Cocktail rubber) Round, orange condom packet with a cartoon on its front …

Communication through Condoms ‘Available everywhere’, ‘inexpensive’ and ‘fast’ are properties that make condoms …

Condom keyring This object is a key ring with a condom. On …

durex Arouser Black condom with illustrated red car and instructions for use.

Erotim "Darling" Red condom pack with twisted pairs, with instructions for use, …

Erotim Ero-plus Orange Condoms with instructions for use, without condoms.

ez.on Two condoms, one open and one closed pack.

Family Condoms with illustrated family, a usage instruction is included.

Flower condom A condom from the company ‘Cabbages & Condoms’, to which …

Footlong Prophylactics For the Extraordinary Man

Format Condoms without condoms. One package is made of plastic with …

Fromm’s Feuchtfilm (moist film) Family planning can be this easy.

Fromms FF The condom is seal-wrapped in foil. This in turn is …

Fromms FF White snap-open cardboard packet. The back side of the box …

Gluck Gluck - Gummi Round, purple condom packet with a cartoon. Inside is a …

Golden Pheasant Three condoms wrapped in golden aluminum. On the pack is …

go with it A 'Fromms' condom in white-blue paper packaging. On the packaging …

Gummi - Bär (rubber bear) Round, red condom packet with a cartoon. Inside is a …

It’s a question of your noggin! Pink condom on orange cardboard. Shrink-wrapped in transparent plastic film. …

Just in case Keyring box made of red, blue and green plastic, contains …

KILROY 10 condoms in red foil wrappers in wallet-like packaging. The …

Let's talk about safer sex For the New Generation

London contur Black condom box on which a car is pictured.

London- the condom Lust 4 fun Colorful condom box with comic by a couple in bed. …

Lord Hygiene Violet condom pack with instructions for use.

Luxury Condoms: Ultrasensitive Thanks to Fish Bladders Employing human and animal tissue is not an achievement of …

Luxus rosé Plastic box for condoms with instructions for use.

Mamba On the front is written in green letters ‘MAMBA’, on …

Mates Mates condom in red packaging. Probably from the UK.

Mates mint fragranced White condom pack without condoms with instructions for use.

Mein 1. Gummi (My first rubber) Round, pink condom packet with a cartoon. Inside is a …

mondos "You can protect us" A turquoise, folded sachet. Glued into it is a ‘mondos’ …

Nirodh The packet contained twelve condoms in aluminium wrappers, of which …

Novelty piglet condom A pink condom. The end of the condom has the …

PAN Three dried-up condoms in cardboard packaging. Printed on this is …

R3 Super Feucht ("Super Moist") Two condoms in white foil with instructions for use. All …

rendez-vous collection R 3 Black-yellow snap-open cardboard packet with the inscription: 'ultrasensitive'. The back …

RFSU Profil Junior Green condom packet, without condoms but with instructions for use.

Ritex ideal Condoms in a white-pink striped box, with blue logo of …

Rough Rider Two condoms in a rectangular, folding box with a blue …

Scherfig fruit cocktail Yellow condiment with figured fruit bowl and instructions for use.

Sex-Fit White tin with a sticker of a girl ice-skating. Advert …

Sex-Tickler Brown condom packaging with depicted woman. Includes Instructions for use and …

Sheep Condom with a Ribbon Modern condom of sheep intestine, soaked in glycerine for conservation, …

Stoppt Aids. A man is still a man. Even with a condom.

Swiss condom The condom is seal-wrapped in blue foil. This in turn …

Teenage Mum ‘Being a Teenage mum is not a game. Use contraception’. …

The real rubber for leisure and the future. Double-leaved yellow cardboard packet for ten condoms

Toolbox The ‘Toolbox’ contains a paper strip to which four packaged …

Turbo - Gummi (turbo-rubber) Round, green condom packet with a cartoon. Inside is a …

Vous allez droit au but... pensez préservatif Be prepared for when you score...get protected

X museomofsex NYC Two condoms, one yellow, one green. They look like a …