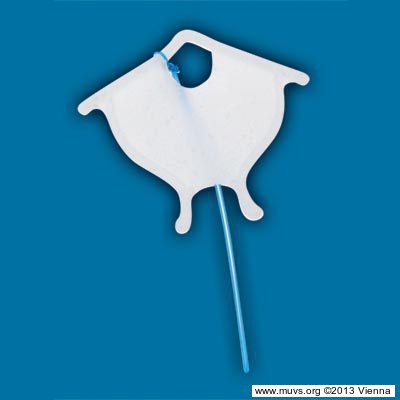 Wholly by chance, it was discovered that the presence of a foreign object in the womb prevents pregnancy. A century ago, a certain Dr Gräfenberg of Berlin produced the first coils by winding silver wire and silk suture. Later models were made of plastic. However, the first frequently caused inflammation, which prevented this method from becoming widely accepted.

The only coil actually shaped like a coil, a model designed by Dr Margulies in 1960, failed to win over a large following. Its name, however, became the term used for all intrauterine devices to the present day.

In the 1960s, Dr. Zipper of Chile discovered that a small piece of copper wire would prevent sperm from fertilizing an egg, which represented a considerable improvement over the coil models available at the time. The copper coil has since become the standard.

But innovations are still being made. Some examples are new shapes that should cause fewer complications, and addition of a small amount of a hormone, gestagen, has produced excellent results (Mirena®).

Anticon mini White packaging contains a coil made of plastic, wound round …

Antigon with insertion device Four-cornered, ring-shaped coil with a magnetic metal strip on one …

Antigon with wings Four-cornered, ring-shaped coil with small wings inwards and a magnetic …

Arisana A white plastic coil in the shape of a loop …

Arisana Two plastic coils in the shape of a loop with …

Beospir D This spiral-shaped coil is very similar to the ‘Margulies’ coil. …

Birnberg Bow (III Regular) A mesh-shaped coil. This coil is an adapted variant of …

Birnberg Bow (IV Postpartum) A mesh-shaped coil. This coil is an adapted variant of …

Birnberg Bow (small) A mesh-shaped coil, made of plastic.

Birnberg Bow (V) A mesh-shaped coil. This coil is an adapted variant of …

Birnberg Bow (VI) A mesh-shaped coil. This coil is an adapted variant of …

Coil At its lower end, the white plastic coil comes together …

Coil Coil with a sealed upper end which is wound round …

Contech-T 380A Coil with a T-shaped end in light-blue packaging. The coil …

Copper T Classic T made of white plastic. The central shaft is …

Copper T 200 Classic T made of white plastic. The central shaft is …

Copper T variant with insertion device T-coil with slightly dipped ‘arms’. The shaft is wound round …

Corolle Coil resembling an 'eggbeater', made up of several plastic wires, …

Cu 7 with insertion device Copper 7 coil with a plastic thread. In addition, a …

Dana Cor A white plastic coil in the shape of a heart. …

Dana Cuprum IUD Brown, plastic IUD in the shape of a small Christmas …

Dr. Ota Ring A white, plastic ring with a metal piece and three …

Endogyn White plastic IUD in the form of a V, with …

Experimental-IUD A V-shaped object, both of whose ends are covered with …

Experimental Loop 2 double-S-shaped coils, each with three plastic elaborations on the …

Experimental Loop A double-S-shaped coil, each with three plastic elaborations on the …

Experimental Szontagh A loop-shaped spiral from Hungary with transparent thread.

Gamma medicated IUD Contains a copper thread or a reservoir with indomethacin.

Goldlily and Silverlily Gold coils have, like almost all other coils, a copper …

Gravigard IUD in the form of a 7.

Gynecoil IUD A ‘snail-shaped’ coil with a long end.

Gynekoil White coil. At its end is a short nylon thread. …

Hall Band, Omga and diaphragm An ‘Inhiband’ made of steel (invented by Dr Herbert Hall), …

Hong Kong Triangles or the Ahmed IUD from Pakistan

Inhiband (Hall) Coil in the shape of a metal ring, still without …

Intra-Utering Historic plastic IUD, which is no longer in use.

IUD The coil is made from fine, see-through, malleable plastic. There …

IUD A circular coil, with a black retrieval thread fixed to …

KS Wing IUDs Two V-shaped coils, one of which has pointed ends. These …

Large Anchor Plastic coil that is formed like a bow, with blue …

Lippes Loop A double-S made from opaque, white plastic, to which is …

Loading Device for copper-T Before inserting a copper-T coil, the ‘arms’ have to be …

Majzlin Spring Zig-zagging coil made of metal with green and white thread. …

Majzlin Spring Zig-zagging coil made of metal with green and white thread. …

MAKROLON Coil made of soft transparent plastic with a black retrieval …

Mark II experimental The coil has a rounded M shape. One side has …

MCU functional IUD Coil with a white manoeuvring stick, whose end forms a …

Mini-Gravigard White plastic coil in the shape of a 7, wound …

No Gravid Copper coil from Italy in grey, helical packaging.

No Gravid Y-shaped coil wound round with copper, with two knobbles at …

Nova T Schering Anchor-shaped coil with retrieval thread, copper is wound round the …

Nova T Schering Anchor-shaped coil with retrieval thread, copper is wound round the …

Nova-T with applicator Nova-T made from opaque white plastic. The shaft has fine …

Ombrelle 380 Coil in a braced T-shape, in beige packaging with blue …

Plastic M M-shaped coil made of white plastic with a light-blue thread. …

Polish Spiran W Coil with 2 ends that curl inwards. The coil is …

Polygon Coil ‘A foreign object in the uterus prevents pregnancy.’ Putting this …

Quadricoil Similar to the Saf-T-Coil, a coil with a thread consisting …

Retrievette IUD Thread Retriever Device for removing a coil by its threads. At the …

Safe-T-Coil A coil with ends that spiral inwards. On one end …

Saf-T-Coil 33-S A coil with ends that spiral inwards. On one end …

Saf-T-Coil 33-S with insertion device Coil with two circling branches and a blue thread. The …

Soonawala copper Y Y-shaped coil round wound with copper. On one end is …

Spring Coil An open circle made of plastic. A ball is fastened …

Spring Coil An open circle made of plastic. A ball is fastened …

Stem pessary In order to insert this contraceptive device into the uterus, …

Stem pessary A stem pessary, presumably made of aluminum.

Stem pessary A so-called wishbone pessary after the design of Carl Hollweg. …

Stem pessary "Out of the means with purely mechanical effect ... those …

Super Dana A white, Christmas-tree-shaped coil without a thread.

Swing CU 380 T-coil made of plastic with a blue thread. The central …

Uterector Metal rod with holes for the fingers. A plastic rod …

Uterector Same product as o1570 but complete and better preserved.

Winata I Made of several loops of nylon threads, wrapped together with …

Wishbone Intra-Cervical Device The upper end of the coil is wing-shaped; at the …

Yusei, Spira and Ota Rings 2 Yusei rings with and without a metal ring in …