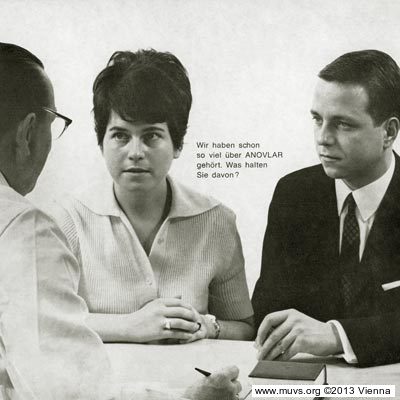 When safe and effective methods of contraception were invented, they became widespread and well known thanks to the media. For example, this was how the general public learned about their introduction, which paved the way for the continuing demand for modern contraception.

In the early 1960s, there was a great deal of debate concerning whether prescriptions should be available to unmarried women, and the topics that currently dominate the media have changed.

Or maybe not: “[We] know that television rarely shows the risks and responsibilities of sex,” said behavioural scientist Anita Chandra. In her opinion, sex is often depicted merely as a pleasurable activity in which contraception plays no role, and this can lead to young people engaging in sex without taking the necessary precautions and before they are ready.

Album Labels and informational materials included in packages of contraceptives

Glass with comic Glass with inscription "Vasectomy is... never having to say you are …

Hare Text on the back: Hare was a symbol of fertility …

Mug Pictured on a white mug is a comic strip sequence …

Mug Depicted on a white mug are a girl and a …

Mug On the mug are seven different illustrations of condoms, playfully …

One cupid rides stork ... while a second holds woman’s shoe

Through the Jungle of Contraception and Sexuality Board game