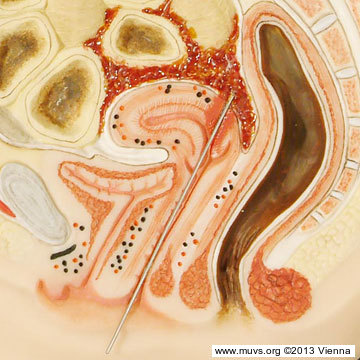 Three-dimensional longitudinal cross-sections of the body show clearly the great danger of illegal abortions performed by non-professionals using objects not intended for the purpose.

Our moulages (models of pathologies) are replicas or on loan from Vienna’s Federal Museum of Pathology and Anatomy. Moulages were produced as late as the 1950s for use by students of medicine until the quality of colour photography advanced sufficiently to replace them.

Casts of plaster, and later silicone, were produced in moulds of wax or a mixture of wax and resin. After the raw forms hardened, they were removed from the moulds and painted, with patients serving as models. Moulages and pictures of them have survived to the present day and still closely resemble the condition involved.