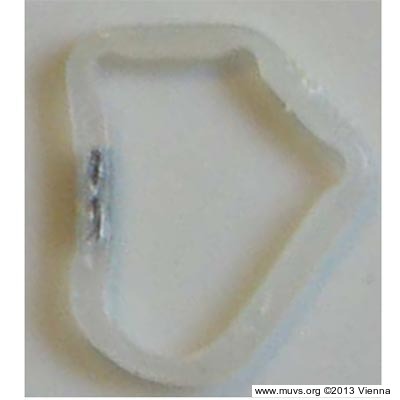 ‘A foreign object in the uterus prevents pregnancy.’ Putting this knowledge into practice proved to be a nearly never-ending challenge: how should the foreign object be shaped so that it didn’t slip out, either by itself or being ejected by painful muscle cramps that lead to inflammation of the mucous membrane?

Innumerable prototypes were tested, improved, abandoned or finally launched on the market. They employed a variety of materials, sizes and geometric shapes. While very few of them had the classic coil shape, this designation is still used as a generic name.

In the 1960s, Danish gynaecologists developed the Polygon, made of soft plastic. Its multi-angular shape fit into the uterus snugly, and the small visible metal part made x-ray check-ups possible.

This coil was inserted shortly after a birth. Compared to current models, the information sheet was extremely brief.

The following report concerns our object:
“I received this coil at the age of 22, in 1966, after having my second child. It was left in place for 13 years, although during this time, I had frequent inflammations and menstrual cramps. For the first seven or eight years, there was a mandatory annual x-ray check-up. After 13 years I received a new coil, which was replaced every two or three years.”

Send as E-Mail
save as PDF
Back to: Coils