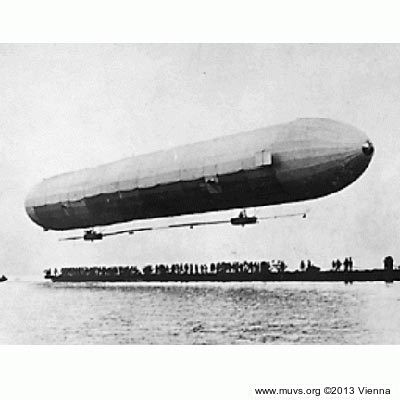 On 2 July 1900, about 12,000 spectators were present at the first flight of an airship based on Count Ferdinand von Zeppelin’s idea. The 18 minutes it spent in the air heralded a fascination with the Zeppelin which was also expressed in advertising: stamps, books, automobile and bicycle tyres and a number of other items made use of the Zeppelin’s fame.

‘Although His Excellency is normally averse to advertisements of all types’, he permitted the use of his name after sampling the meat product in question: the Zeppelin sausage was created by Frankfurt butcher Stephan Weiss.

Other manufacturers were not as successful in their attempts to obtain similar approval: in 1909, a distributor of condoms, E. Vier & Co of Dresden, was taken to court. The company had packaged Z. Discret brand condoms in cans sporting a picture of a Zeppelin airship. The resulting correspondence has been preserved by the Zeppelin Museum in the city of Friedrichshafen. The defendant responded with the following statement: ‘Approximately 3/4 of a year ago we were offered [...] tin cans with eight different depictions of the Zeppelin airship remaining from a shipment for a factory where gramophone needles are produced. Since we have received repeated requests for condoms in packages of three, they were used for this purpose. As this packaging was unexpectedly met with a great deal of approval, we packaged 12 cans into each box labelled Z. Discret and with the name of our company.’ E. Vier & Co was eventually forced to stop using phrases such as ‘Zeppelin rises above Lake Constance’, etc., though they could leave the illustration of an airship on the metal boxes they had purchased.

Unfortunately, our collection does not include a sample of this item.