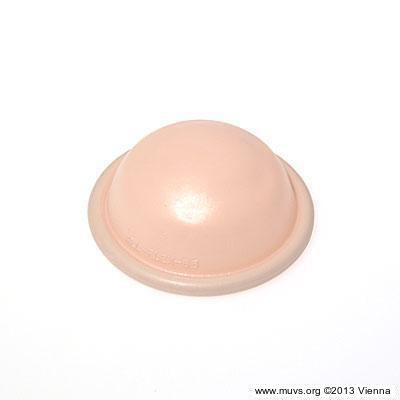 The diaphragm or ‘cap’ is a barrier contraceptive device that comprises a shallow dome made of rubber or silicone, mounted into a rim that is also covered with rubber or silicone. It is inserted into the vagina so that it sits in front of the cervix, where it prevents sperm from reaching the uterus.

A woman must be fitted with a diaphragm by a doctor, because it is essential that the correct size is used in order for the diaphragm to be able to prevent pregnancy. In the course of a gynaecological exam, the doctor also shows the woman how to insert and remove it correctly. When positioned correctly the diaphragm does not restrict freedom of movement and the wearer should not be able to feel it.

The diaphragm can be inserted up to two hours before having sex. In order to make it easier to insert and as a further barrier against sperm, a spermicidal cream is applied to the rim of the diaphragm before it is put in.

The diaphragm should be left in place for at least six hours after intercourse, until there are no longer any viable sperm left in the vagina. Once removed, it is cleaned with warm water and soap.

The diaphragm was developed towards the end of the 19th century by Doctor Wilhelm Mensinga. Thanks to tireless pioneering by Margaret Sanger in the United States of America, Aletta Jacobs in Holland and many others, the diaphragm was very widely used until the introduction of hormonal contraceptives (starting in the 1970s).

Today it is used by women who don’t like or can’t tolerate the pill etc., or who don’t have sex very often.