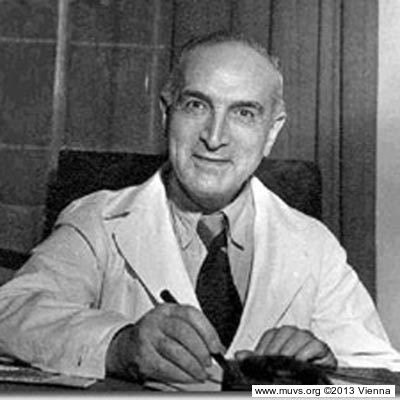 'Gräfenberg's Ring' consisted of a spiral coil of silver and is considered the precursor of all modern intrauterine devices (IUD). Gräfenberg first introduced it to the public in December of 1928. Subsequent research attributes its spermicidal effect to impurities in the silver, especially its 28% copper component. Gräfenberg had undertaken prior experiments with intrauterine devices at the beginning of the 1920's, utilizing silk threads. 'Gräfenberg's Ring' was finally replaced by a synthetic spiral in the 1960's.

Ernst Gräfenberg was born in Adelebsen, close to the town of Göttingen, and began his studies at the clinic for Obstetrics and Gynecology at Kiel University. He initially did research on the implantation of the ovum as well as the metastasis of cancer cells through the circulatory system (the so called Gräfenberg  Theory). He became Head of the Obstetrics and Gynecology Department at Berlin and later opened his own clinic in Berlin-Schöneberg.

Gräfenberg volunteered for World War I and earned the Iron Cross, both first and second class, as a medical officer. He returned to his private practice in Berlin after the war. Gräfenberg was one of the few doctors who made abortion available as a medical option. Famous movie stars as well as poor servant girls and workers numbered among his patients. He based his fees upon the circumstances of the individual, including working free of charge.

In 1933, Gräfenberg  was demoted from his position as head of the department, because of his Jewish ancestry. Despite numerous warnings, he felt secure in Berlin and was actually able to practice medicine for a number of years. However, in 1937 Gräfenberg was arrested on fraudulent allegations, including smuggling of currency and postal stamps. After being condemned to three years of prison and charged a fine of 199,000 Reichsmark, he was incarcerated at the penitentary Brandenburg-Görden where he lived until 1940. Upon his release, Gräfenberg was able to eventually emmigrate to the USA via Siberia and Japan, by selling his possessions. His flight found further support from friends overseas, especially from Margaret Sanger, founder of the worldwide birth control movement.

Gräfenberg initially worked as a pathologist in Chicago, before settling down in New York as a gynecologist. In 1944, Gräfenberg described the female erogenous zone subsequently termed 'G-Spot' in his honor. He limited his contraceptive prescriptions to cervical caps and diaphragms. He was also dedicated to publicising these tools. The effects of Parkinson's Disease forced Gräfenberg to close his medical practice in 1953. However, he did not give up his calling and actively worked at the Margaret-Sanger-Research Bureau till his death in 1957.