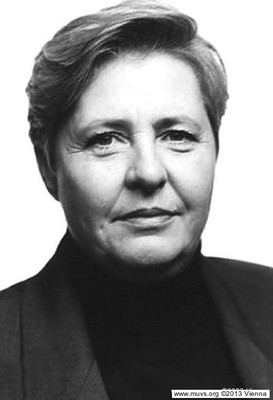 In 1979, when Johanna Dohnal (1939-2010) was made Austrian governement’s permanent secretary for women’s affairs (along with four other female permanent secretaries), this appeared to be a “shabby attempt, as it was poorly endowed and remunerated, by the Social Democratic Party of Austria to appease and integrate the (young) women calling for change”, writes historian Gabriella Hauch. The fact that Dohnal would not perform as merely a token should have been obvious beforehand: a factory worker’s illegitimate daughter, she was accustomed to fighting for justice. At the early age of 16, Dohnal joined the Social Democratic Party and started by working for Vienna’s Kinderfreunde, a child-welfare organisation, and as the secretary of her party chapter in Penzing, Vienna’s 14th district. In 1969, she was appointed a district councillor, in 1972 Vienna’s secretary for women’s affairs, and in 1973 a member of the state parliament and municipal councillor in Vienna. In 1974, Dohnal was elected to the Federal Committee for Women.

Dohnal played a significant role in the controversial struggle for the legalisation of abortion in 1974. She is partly to thank for the fact that pregnancies can be legally aborted within the first three months after implantation of a fertilised egg cell in the uterus, regardless of the personal reasons for taking this decision. In other countries, the law forces women to justify their choice and, if necessary, invent an acceptable motive.

Dohnal’s career continued upward: in 1987, she became the Social Democratic Party’s chairperson of women’s affairs and was Austria’s first minister of women’s affairs, from December 1990 to April 1995. Even after retiring, she continued to fight injustice, often in the face of resistance from her own party. One example is the state absorbing the costs of abortion and contraception, which is still not the case in Austria, making it unique in Western Europe. In contrast, the health-insurance funds pay for ‘leisure pursuits’ that involve men.

On the occasion of her 70th birthday, one of her successors as minister of women’s affairs wrote that Dohnal was the first female politician to clearly explain that women deserve the same rights, the same share of power, and the same share of prosperity as men. Even the annoyance and anger of others never prevented her from criticising clichés concerning gender roles, inequality in public or private life, or a lack of social security.