Why the hurry? Sperm cells move at record-breaking speed 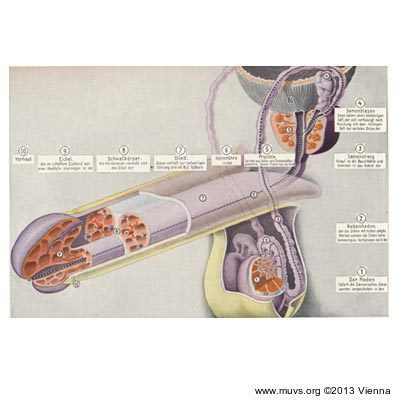 The unbelievable power of ejaculation raises the question why is it necessary. What’s the need for the hurry?

The first part of the sperm cell’s journey is from the testes to the base of the penis, which could be termed the launching pad. This is a considerable distance, but fine muscle fibres contract to move things along. After leaving the testes, sperm cells travel through a number of ducts and into the epididymis, where they mature within just a few hours. Then the journey continues through the winding vas deferens: about 50 to 60cm in length, it extends through the inguinal canal into the abdominal cavity. Near the bladder, the sperm ducts widen to form a reservoir where the sperm cells are stored until needed.

The second leg takes the sperm cells through the urethra: 20cm in length, it begins just below the base of the penis before taking them through that organ to its tip and then out into the world. Just before the semen leaves the body, its speed amounts to about three millimetres per minute – which is really something in light of the sperm cells’ size! Without so much pressure, a portion of the semen would remain in the urethra, and the sperm cells would either die there or dribble out.

That wouldn’t be good, because nature intends that as many sperm cells as possible are available for fertilisation of an egg. A number of mechanisms create the pressure: the urethra contracts when displaced by erectile tissue, and the opening of the penis decreases in size. A similar thing can be observed with a common garden hose: when squeezed together, the pressure rises and the water shoots farther.

Part 3 of the journey comes after ejaculation, when the semen travels to the ovaries. As soon as the sperm cells enter the uterus, through what’s called the uterine orifice, their tails move them along. And they’re good at it, too! Every second, the cells advance by the length of their own body, 1/20th of a millimetre, against a counter-current of mucous. In other words, the sperm cells can keep up with record-breaking human swimmers.

The total distance, from testes to the mouth of the urethra at the penis’ tip, with all its bends and curves, measures about 2 metres! After that comes about 15 to 20cm from the vagina to the Fallopian tubes, where an egg cell that can be fertilised just might be located. Because of all the obstacles, no more than 300 of the original 500 million sperm cells arrive at their journey’s final destination.

Thanks to Prof. Walter Stackl MD for his help as a scientific advisor.